Renewable energy production by solar PV- and wind parks is strongly increasing globally. The installed PV capacity has grown from 40 GW in 2010 to 710 GW in 2020 and the installed wind capacity has grown from 181 GW to 736 GW in the same period (see ref [1]). The estimated growth in the solar PV/wind renewables production for the next years is predicted to be in the range of 20 % per year.

During the same period, a decline in the levelized cost of electricity (LCOE) produced as photovoltaic solar power was 85 % and for wind energy, the decline was 50 – 60 %. This development is powered by the need to reduce greenhouse gas production from coal- and gas-based power generation. The massive cost reductions, also make renewable power projects cheaper than new coal-fired power plants today.

What are the problems with more renewables in energy production?

The increase in renewable energy production is of course very positive as seen from the green-house gas-reduction viewpoint. However, the increasing amount of solar PV- and wind energy introduces some potential problems.

Firstly, solar PV- and wind energy production are basically not dispatchable, meaning they cannot be turned on and off as electricity needs change over a period of time. The produced energy must be consumed locally or fed into the grid when generated. Also, when production is higher than consumption, it potentially leads to curtailment, meaning potential production is lost.

Secondly, the sun only shines in the day and can hide behind a cloud, and the wind varies a lot, leading to dips or complete halts in production. This has all been ok when the amount of such energy was small compared to traditional generation from hydro-, coal-, gas- or nuclear power plants.

To overcome the variability and stochastic nature of renewables, energy storage is used. This might be short-term storage to compensate for fast stochastic changes, such as caused by clouds passing a solar PV plant or it might be stored to keep energy output stable from day-time to night-time or similar.

This complicates the power plant control (PPC) because the PPC system must coordinate the short time-scale decisions about when to charge/discharge the stored energy to comply with grid codes, produce energy according to commercial agreements, and transmission system operator (TSO) requests.

Another aspect of this is to also manage and optimize the longer timescale energy flow based on energy storage capacity, commercial aspects, and energy market- and weather forecasts.

The energy storage may be of different types, such as Li-ion batteries and hydropower (water reservoir based). The use of Li-ion batteries is growing fast, partly due to strongly declining prices (98 % reduction from 1991 – 2018).

Another potential negative influence of a decreasing fraction of traditional (stable) power generation in a connected power system is the reduced fraction of spinning inertia traditionally supplied by the big, heavy rotational masses of turbines, not present in the production of solar- and wind-power systems.

Spinning inertia means the kinetic energy stored as rotational energy in the turbines of traditional energy production from hydro, thermal, nuclear, and fossil fuels. If changes in the grid energy balance occur e.g. because of a sudden turbine failure, the missing energy is supplied by the stored rotational energy of the turbine slowing down, until the relatively slow generators can increase their steady-state energy output again by e.g. increasing supplied power (water flow, increased gas- or coal use) to restore the grid frequency.

This potential negative effect of the relative reduction in the active spinning inertia on a grid can be counteracted by the development of new “grid-forming” inverters which enable batteries and other stored energy resources to take a more active role in maintaining the reliability and stability of the grid frequency. This will probably be an integral technology for renewables and thus an inverter-dominated grid.

Structural changes of the energy system – the big picture

The increasing renewables generation, the increased electric energy use, and the digitalization and improving communication infrastructure, create and make possible, changes in the big picture of energy generation, distribution, and consumption.

On the local level, energy generation and use can be handled via smart grid technology for dispatch of consumer energy use such as electric vehicle charging, household energy use, etc. In addition, rooftop and industrial renewable generation, including related battery storage can be parts of this.

This applies to the utility level as well, where local energy generation can be used locally instead of transmitted via long-distance transmission lines which are needed for remote or centralized power production.

All the mentioned changes to the grid and to power production may reduce the need for building new and expensive power transmission lines, even when the electric power production increases. This possibility is further enhanced by the introduction and realization of virtual power plants (VPPs). 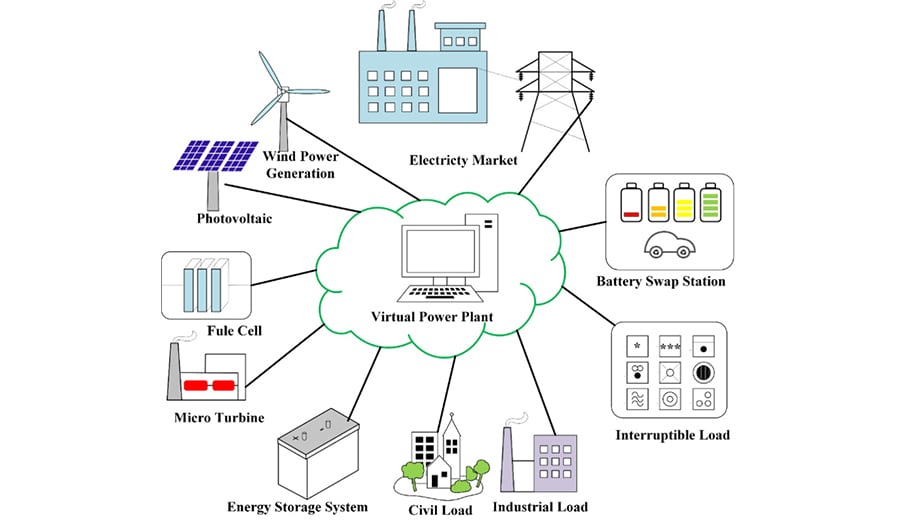 A virtual power plant is a cloud-based distributed power plant that aggregates the capacities of heterogeneous distributed energy resources for the purposes of enhancing power generation, as well as trading or selling power on the electricity market.

The functionality of Asset Management- and SCADA systems, as supplied by Prediktor’s PowerView technology are becoming a mandatory part of the new power system that is emerging. The tools such systems represent will make possible the extension of renewable power plant systems into these new environments, delivering the necessary functionality for operative analysis, reporting, and support.

Steinar Sælid is the founder of Prediktor and the company's Chief Scientist Officer. In 2019 he received the NTNU honorary award for his ground-breaking achievements and his lifetime contributions to the field of engineering cybernetics.